TREVI GROUP FOR THE POPULATION AFFECTED BY THE EARTHQUAKE

Trevi Group supports the population affected by the earthquake with a donation to the Fire Service Command in Ravenna.

The Trevi Group Executive Vice President, Gianluigi Trevisani, handed over the keys of two containers to the Fire Marshal of the Department of Ravenna, Pierpaolo Patrizietti. This donation will allow the command of Ravenna to make its section in Muccia (small town in the province of Macerata) independent. This section has been active for some months and represents a focal point for the operations of the firefighters in the area around Camerino, shocked by the earthqauke.

The Fire Marshal expressed deep gratitude for the donation, that arrives now that some base camps are going to be closed. In fact, now the firefighters need to keep their presence on the ground with structures that have to be more flexible but also functional. Thanks to these containers, the firefighters dedicated to the support of the population affected by the earthqauke will have the possibility to get around the different towns in Camerino area, counting on a stable foothold to spend the night in.

In this way, Trevi Group wants to demonstrate its closeness to the population shocked by the earthqauke and is glad to support the operations of the Firefiighters, that have been on the front line since the beginning in all the activities of recovery and reconstruction. 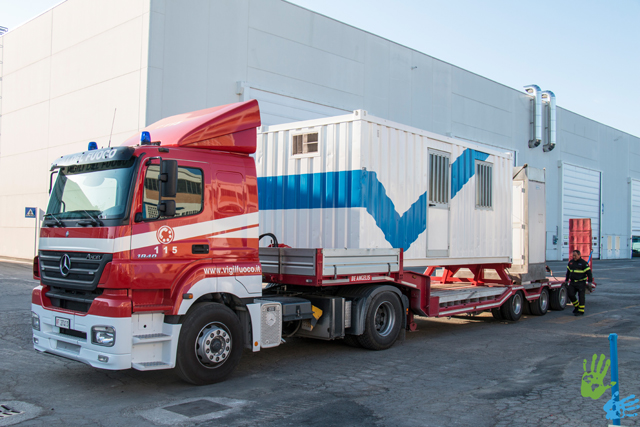