On 24 October 2019, the Amerigo Vespucci bridge in Florence was reopened to the public. The bridge, designed by Eng. Riccardo Morandi, had been closed to traffic for almost a year to carry out safety works, after having shown alarming erosion phenomena under its left pier.

On 24 October 2019, the Amerigo Vespucci bridge in Florence was reopened to the public. The bridge, designed by Eng. Riccardo Morandi, had been closed to traffic for almost a year to carry out safety works, after having shown alarming erosion phenomena under its left pier.

Trevi Spa, which some time ago intervened with success in the rehabilitation works for the Lungarno Torrigiani, was appointed once again to carry out, within a joint venture, safety works involving the foundations beneath the left pier of the Vespucci Bridge in Florence. This significant intervention required the execution of injections through manchette tubes (TAMs), installed by means of small diameter directional holes.

During the press conference for the inauguration and reopening of the Bridge, Mr. Nardella, Mayor of Florence, publicly thanked Trevi in the presence of journalists and cameras for having brilliantly solved the safety issues through the interventions carried out. Also Eng. Vincenzo Tartaglia, in his quality as Mobility Director of the Municipality of Florence, congratulated Trevi on the professionalism and the excellent work carried out by the staff working in the jobsite.

Mayor Nardella also declared, "It is one of the most complex interventions ever done on Florence bridges over the last decades, after the one on the Indian Viaduct. The project was challenging especially from an engineering point of view and was planned before the disastrous collapse of the bridge in Genoa. Vespucci is also the only bridge designed by Eng. Morandi in Italy having undergone safety works”.

Works were necessary because "the current of the river had dug a deep erosion pit underneath the left pier of the bridge. Moreover, the significant river flows during the execution of the works made the intervention more difficult. Grout injections – carried out by remote-controlled drilling from the Arno bank – proved to perfectly target the intervention areas", reported a note issued by Palazzo Vecchio.

In consideration of the difficulty of the intervention, while safety works were performed, Trevi Spa carried out a test field with the purpose of validating the method and the materials chosen. During the whole time of the activities, the structure was monitored to verify the effects produced by drilling and grouting operations.

Specifically, a total station was installed on a building with the aim of monitoring the movements of both the structure and the foundations, by means of the sensors located in different parts of the bridge.

While drilling and grouting operations were carried out, the bridge monitoring system always and only indicated values of "cyclic" movement exclusively due to the temperature range.

The effectiveness of the intervention has been proven comparing the seismic test values, obtained before and after the grout injections. In particular the “grouted soil” showed that the P-wave velocity increased with an average of 60 %.

Description of the intervention carried out by Trevi Spa

With the aim of minimising the risk of movements and in order to ensure that the interventions were not affected by both the river current and flood risk, it was deemed necessary to operate from the ground, by installing injection pipes using directional drilling from the shore. Boreholes followed a curvilinear path with a starting angle of about 20° and an arrival angle of 0° (with respect to the horizontal axis).

The drilling sequence was constantly monitored by means of an electronic probe housed in the first drilling rod (probe housing) screwed behind the hammer. A bent sub between the hammer and the probe housing provided the angle necessary to steer the bit along the project trajectory.

DETAILS ON THE BRIDGE: 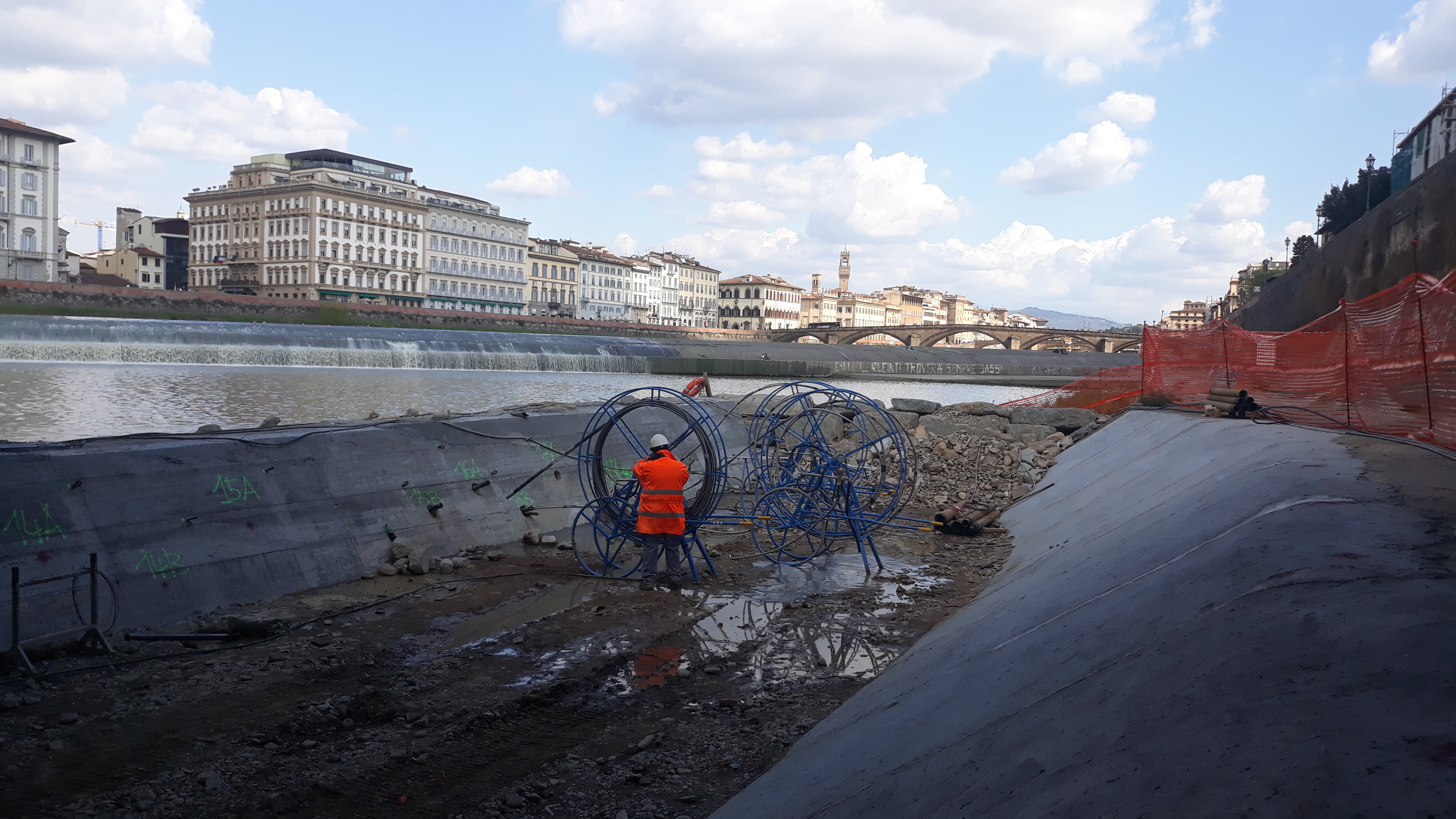 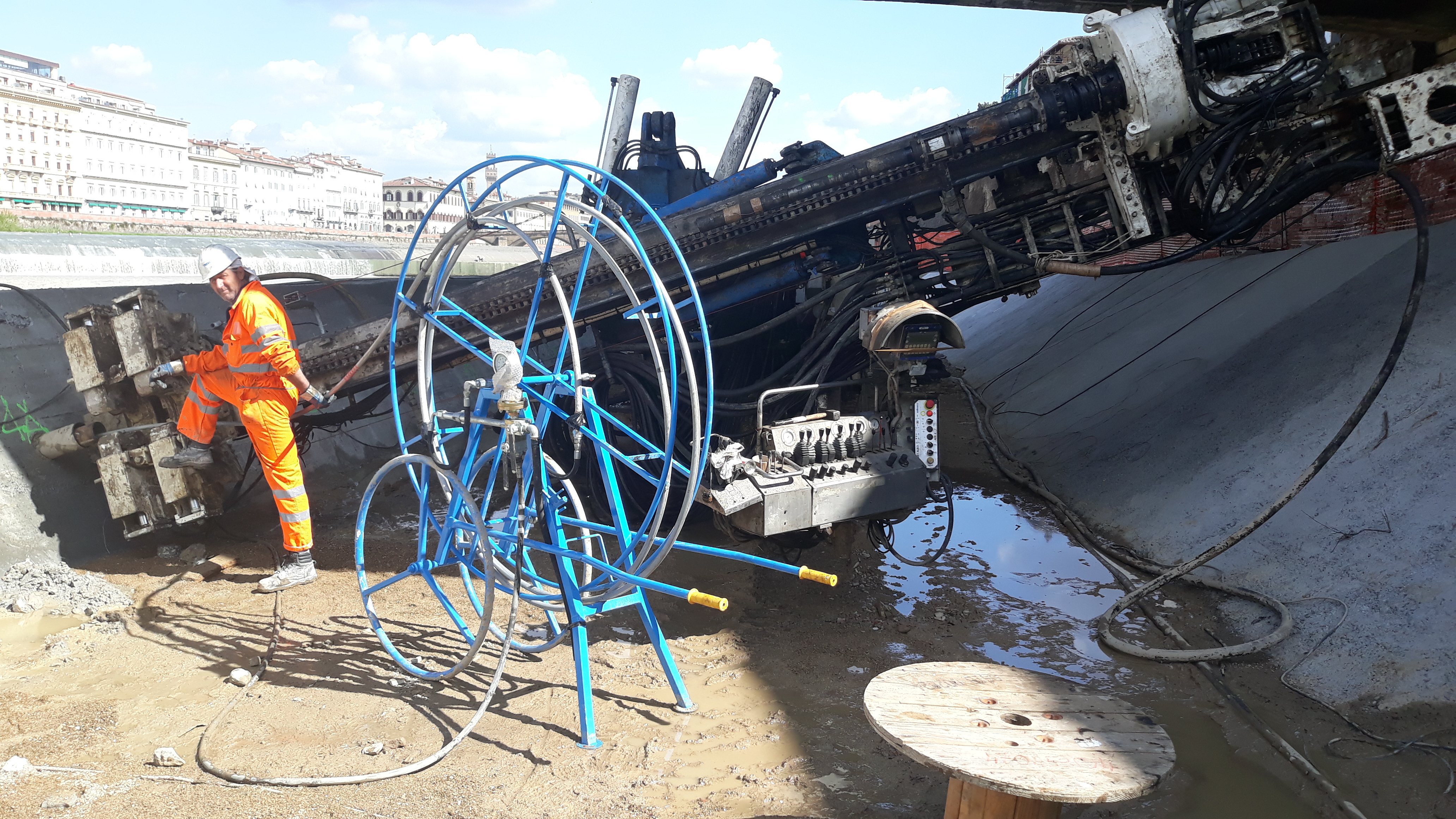 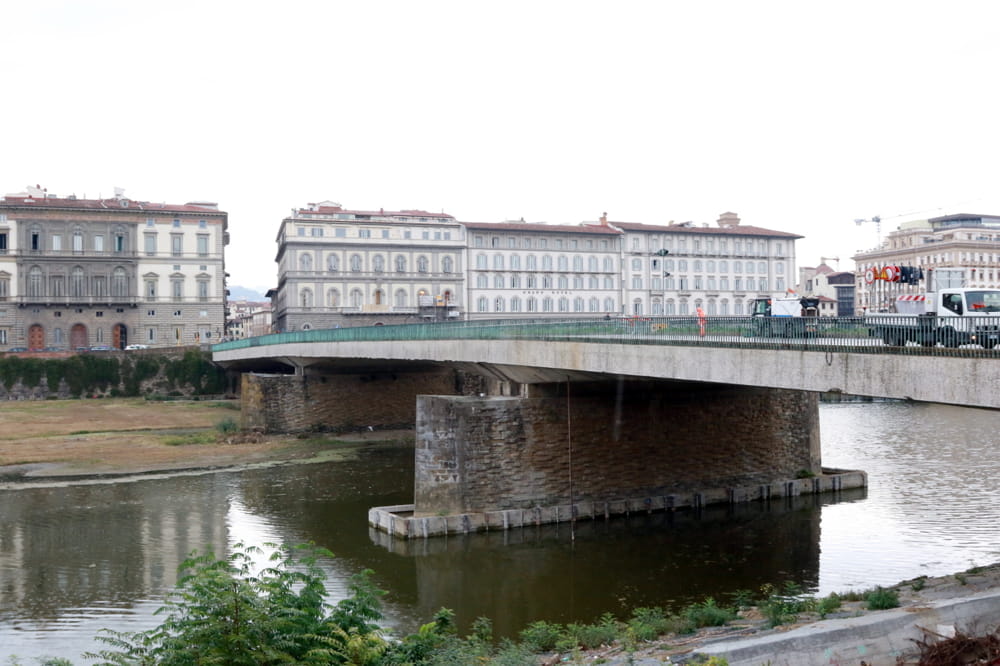 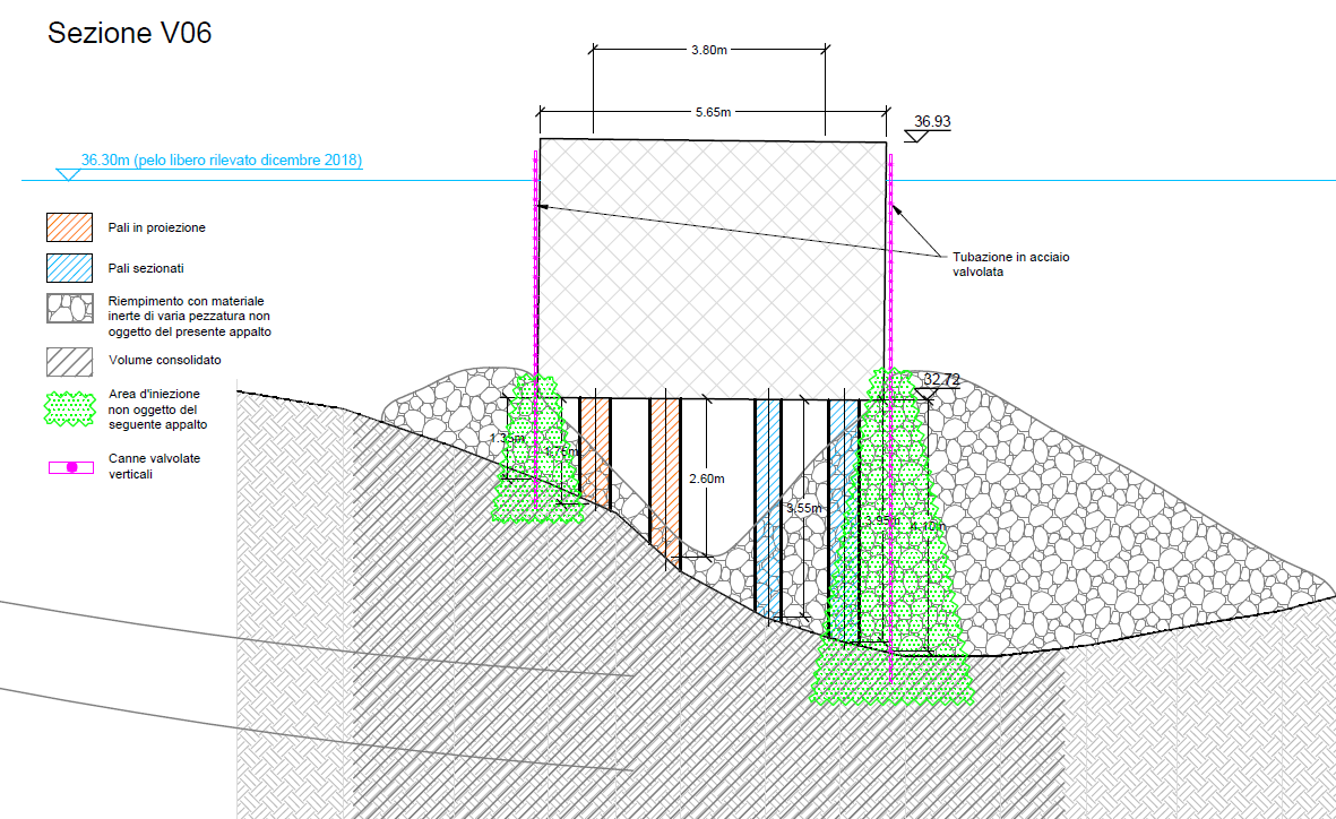 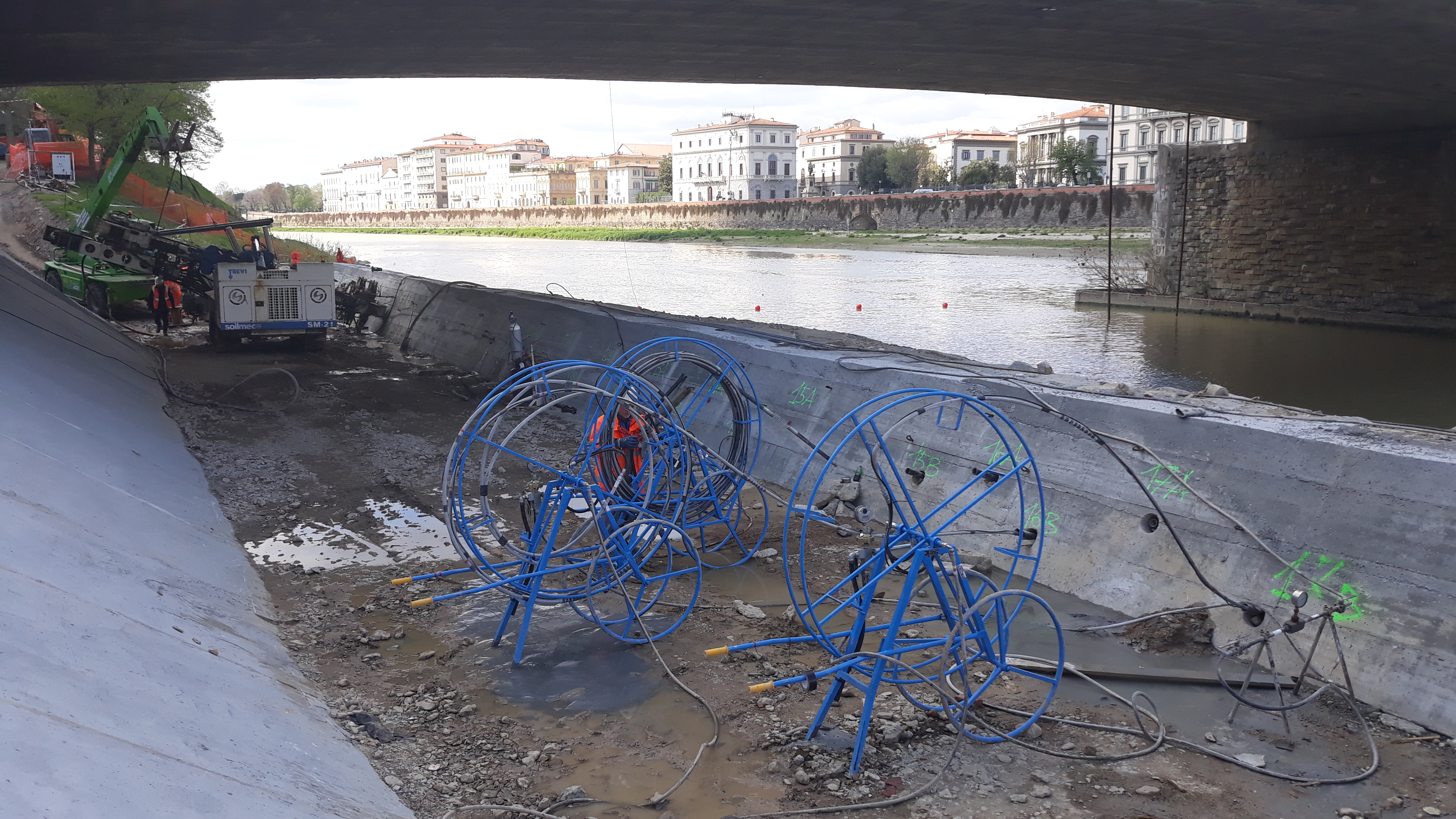 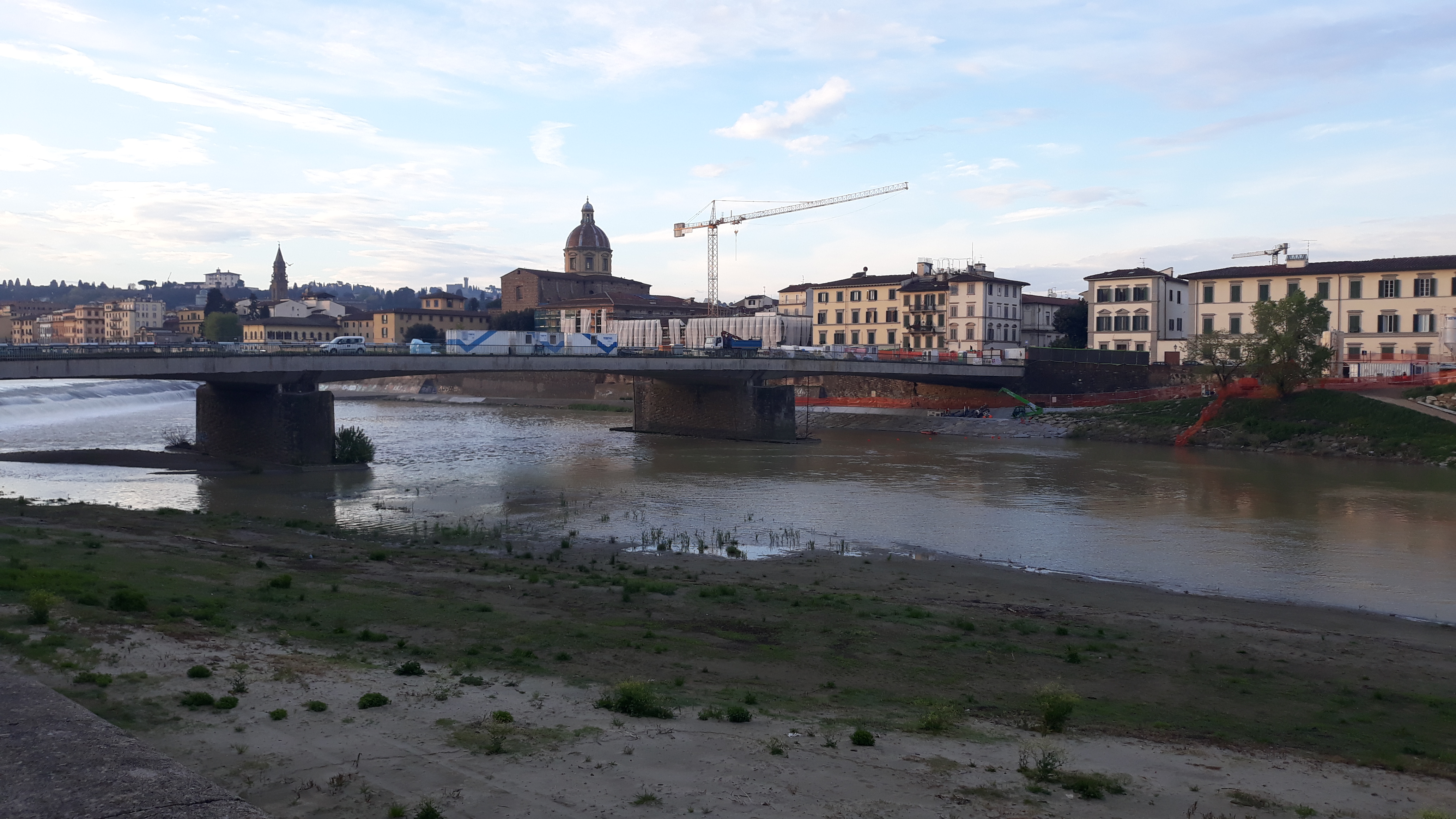 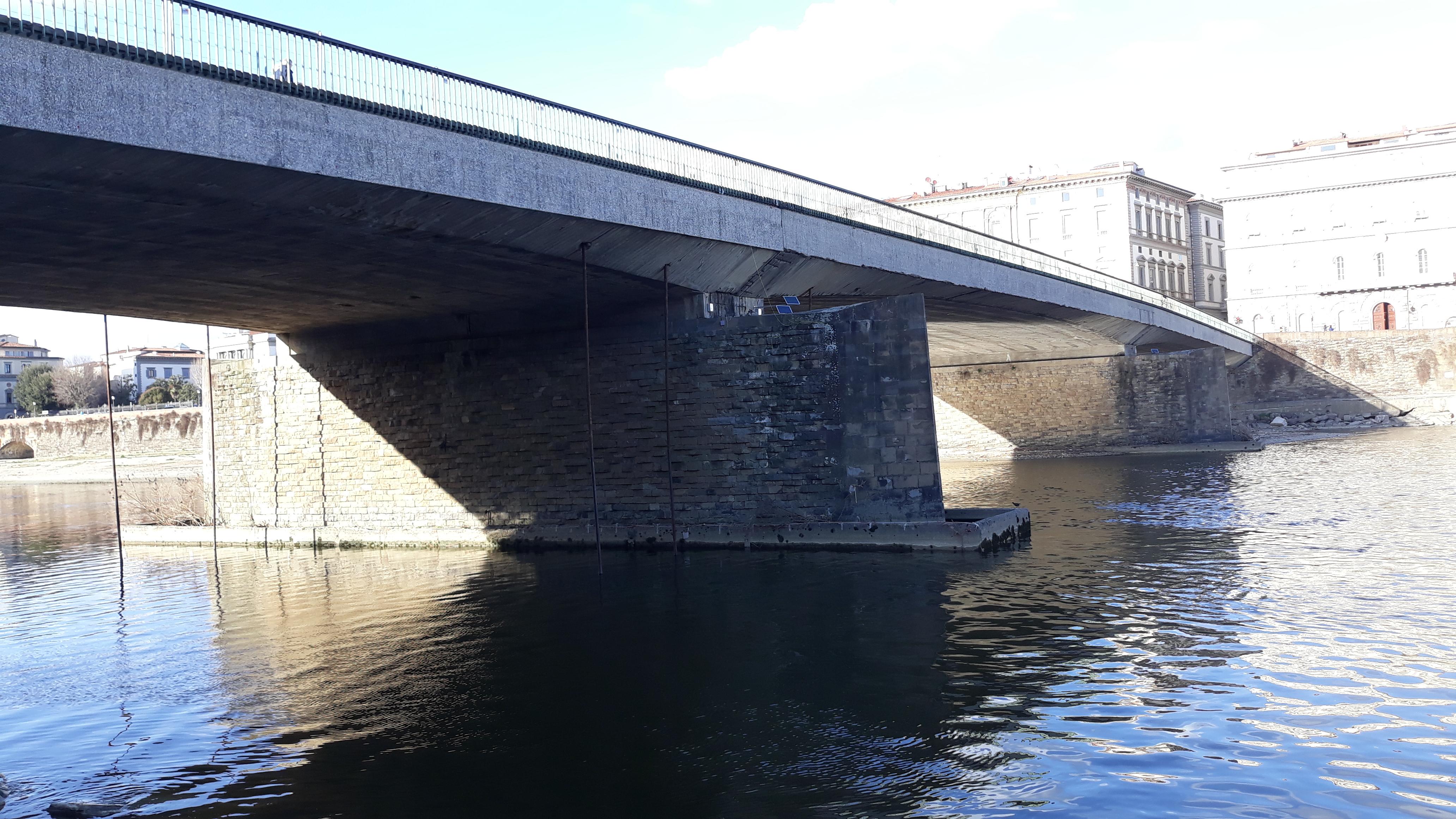