A technology called heavy dynamic compaction as part of the completion of the preliminary works for the construction of the new terminal container Stockholm Norvik Port in Sweden.

As part of the completion of the preliminary works for the construction of the new terminal container named Stockholm Norvik Port, Hercules Trevi Foundations AB, the Swedish company of the TREVI Group, was awarded a further contract for "soil improvement" works after having successfully completed a consolidation intervention by means of jet grouting and lime-cement columns. This second phase involves the use of a technology called heavy dynamic compaction.

The working area is about 96,000 square meters, originally consisting of a marshy area whose predominantly clay sediments have been reclaimed and partially replaced by stone material from the spoil obtained by the rock blasting of the surrounding magmatic reliefs. The sediment is treated through a regular mesh of about 15,500 superficial compaction points, by applying operational parameters studied and optimized to obtain a 10 meter deep radius for each point, according to the degree of compaction required. It will serve as a foundation ground whose structure is designed to safely support the heavy loads resulting from the container handling and storage as well as for the port services provided on the dock.

The technology used, rarely applied in Sweden, is meeting not only the design requirements, but also the basic criteria of the NCC general contractor and the contractor company Stockholms Hamnar, including the tight completion time. Therefore, Dynamic Compaction is an effective and functional method and confirms the leadership of TREVI Group with regard to the choice, proposal and application of modern and innovative technologies in any geotechnical field. 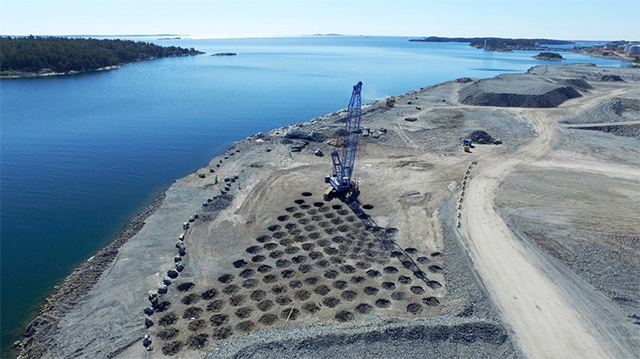